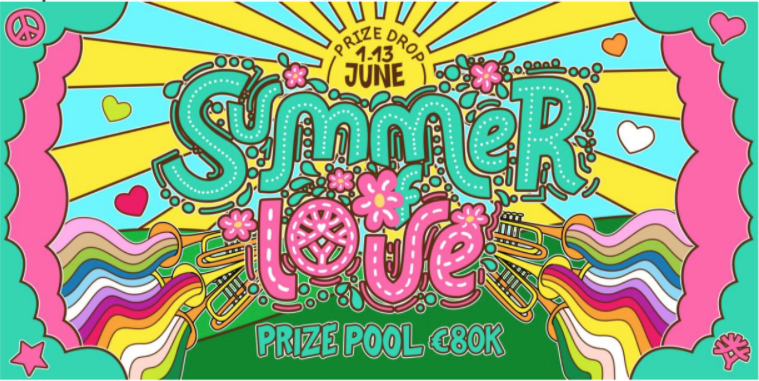 A summer breeze hushes through the park. The sound of Jefferson Airplane’s  “Somebody to Love” fills the air. The sun beams gloriously overhead and your lush,  leafy surroundings are shared by a litany of smiling, daisy-crowned faces. Happy  summer bodies decked out in summer dresses and brightly coloured bell bottoms  march in unison toward this month’s fun-stuffed festival…

Welcome to our Summer of Love campaign!

Think Woodstock. Think Isle of Wight Festival. Think San Francisco. Then add them  together and double it!

And as the party’s getting started from New York to New South Wales, the parade’s  pumpin’ in the Serengeti Wetlands too in brand new, Gator Gold Gigablox! With  frequent Free Spin Multiplier Wilds and Golden Gator Super Symbols which pay from  2-of-a-kind, this cash-crazy gator will be along for the whole damn festival!

With us so far? Let’s Get Busy Turnin’ Quirky!

From 1st – 13th June, players are joining hands with Daruma Dolls and Gods alike  as €80,000 worth of prizes are hidden in our most colourful games. Players rainbow reeling into Gator Gold Gigablox, Golden Fish tank, Multifly!, Valley of the Gods, Lucky Neko, Holmes and the Stolen Stones, Jackpot Raiders and Cauldron could  share the love in random prize drops over two spectacular weeks.

Everyone’s eligible for a prize in this parade!

Time to start getting your players loud and proud about this summer’s hottest slot  festival. Welcome to the Summer of Love!

1. SUMMER OF LOVE is a global campaign and it is open to all customers who are  aged 18 years or over and have registered an account with an operator offering any  of the below specified participating games: Gator Gold Gigablox, Golden Fish tank,

3. There is no minimum bet required to participate in SUMMER OF LOVE campaign.

4. Prize pools for SUMMER OF LOVE campaign is set up in EUR and might be

6. To participate in the campaign, players shall confirm that they wish to take part in  any of the stages of the campaign by clicking “join now” in the pop-up window.

participating games during the campaign period. No additional payment is required  to take part in the campaign.

10. Operators must notify their Key account manager by the 7th May 2021 in case  they want to opt out from SUMMER OF LOVE campaign.

1. Any bet placed on the slot/s Gator Gold Gigablox, Golden Fish tank, Multifly!,  Valley of the Gods, Lucky Neko, Holmes and the Stolen Stones, Jackpot Raiders,  Cauldron during the campaign period can trigger a random mystery prize from the  prize pool.

6. Players can win more than 1 random prize reward during the campaign. 7. Prize Drop will run in Gator Gold Gigablox, Golden Fish tank, Multifly!, Valley of  the Gods, Lucky Neko, Holmes and the Stolen Stones, Jackpot Raiders, Cauldron,  but it’s a subject to the games being available in certain environments, and released  by operators.

– Prize pool for the SUMMER OF LOVE Prize Drop campaign is 80.000 EUR. – All prizes won will be automatically credited to the players’ casino accounts  instantly if operator has BOOST Prize Drop mechanics fully implemented. Otherwise,  winners reports can be provided on a daily basis for operator to credit their winners manually.

Want to join one of the biggest Online gambling communities? Sign up to TuskCasino and start playing Online Slots, Online Poker and many more fun online betting games. ¿Are you more into sports? Then place your bets on your favorite team or player, because at TuskCasino you can also enter online sports betting easily. Place football online bets, choose your favorite basketball bets and many other sports such as tennis, cricket… Whichever sport you feel most comfortable betting on.