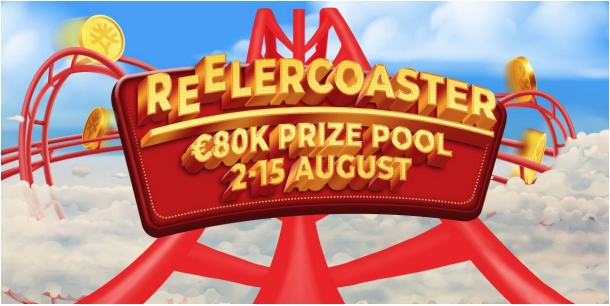 Brace yourself. Things are about to get extreme.

Just try and tell us we’re wrong as you’re catapulted into the air at 100mph in mere  seconds. Get ready… you’re about to experience some serious G-force.

For the next two weeks, you’re set to navigate every twist and turn of the track at  breakneck speed as you take a ride on Yggdrasil’s REELERCOASTER!

Thrill Seekers, grab a ticket and get in line for the ride of your life with €80,000 in  random prizes up for grabs.

But this is no ordinary rollercoaster, speed freaks! Hold onto your eyeballs as we’re  launching you into our latest BOOST Promotional Tool: JackDrop, where in the  final loops of this top thrill campaign, even BIGGER rewards await!

From 2nd – 15th August, grab a seat at the front of the cars to get the best view of  the real money prizes waiting to be won on some of your favourite games. Get ready to race around the high-speed corners of Golden Gorgon, Holmes and the  Stolen Stones, Age of Asgard, Dwarf Mine, Hades Gigablox™, Vikings Go Berzerk,  Jackpot Raiders and Vault Of Fortune where players can win a share of €60,000 in  14 days of Prize Drop and introducing JackDrop where prizes are even more juicy:  up to €5,000 daily on 12th and 13th August, and all the way up to €10,000  between 14th and 15th August!

Get ready for the eye-watering, unrelenting, mouth-opening, non-stop speed of  Yggdrasil’s REELERCOASTER!

2. REELERCOASTER is a global campaign and it is open to all customers who are  aged 18 years or over and have registered an account with an operator offering any  of the below specified participating games: Golden Gorgon, Holmes and the Stolen

3. There is no minimum bet required to participate in REELERCOASTER campaign.

4. Prize pools for REELERCOASTER campaign is set up in EUR and might be  subject to currency conversion fluctuations.

1. Any bet placed on the slot/s Golden Gorgon, Holmes and the Stolen Stones, Age  of Asgard, Dwarf Mine, Hades, Vikings Go Berzerk, Jackpot Raiders, Vault Of Fortune, during the campaign period can trigger a random mystery prize from the  prize pool.

6. Players can win more than 1 random prize reward during the campaign. 7. Prize Drop will run in Golden Gorgon, Holmes and the Stolen Stones, Age of  Asgard, Dwarf Mine, Hades, Vikings Go Berzerk, Jackpot Raiders, Vault Of Fortune,  but it’s a subject to the games being available in certain environments, and released  by operators.

– Prize pool for the REELERCOASTER Prize Drop campaign is €60,000. – All prizes won will be automatically credited to the players’ casino accounts  instantly if operator has BOOST Prize Drop mechanics fully implemented. Otherwise,  winners reports can be provided on a daily basis for operator to credit their winners  manually.